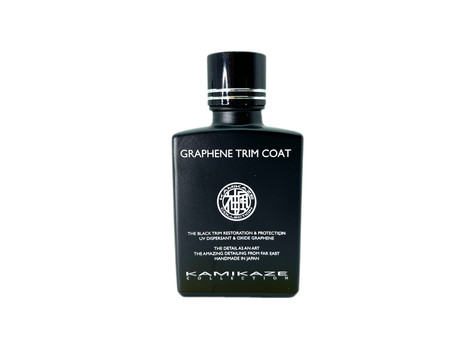 or make 4 interest-free payments of fortnightly with

Utilising Graphene and carbon nanotubes
The same material that is attracting attention as a nanomaterial
It is added for the purpose of "promoting binding" to the black plastic or resin surface and eliminating static electricity in the black resin part that is easily charged .
Due to its high conductivity and high levelling property, it exhibits sufficient antistatic performance even in nano-level ultra-thin films.
Delayed deterioration of the film due to UV adsorbent
Generally, the whitening of the black resin part is caused by ultraviolet rays.
Over a long period of time, the molecules on the surface layer of the black resin deteriorate and are destroyed, and after a certain period of time, they deteriorate at once .
An adsorbent that has the effect of delaying the destruction of the film against ultraviolet rays is added to the film of siloxane resin .
As a result, it is more resistant to ultraviolet rays than the general cured resin type.
Exquisite self-leveling
The difference between the construction of this product and the conventional product is .
Development with an emphasis on levelling performance that does not wipe as much as possible has been carried out many times.
Making the formed and cured film as thick as possible was developed in line with our philosophy that a physically thick film can protect the object as a sacrificial film rather than a chemical protection property .
Of course, construction requires so-called "knacks" such as coating at a constant speed and coating at a constant pressure, but construction with a thick film is an advantage in protecting objects .

* After use, it can be stored for about a year by plugging it in. Be sure to plug it in when storing.
* After use, the applicator is completely cured and cannot be reused.
* If an application error occurs, rub it with a magic sponge and a strong detergent such as alkaline detergent several times to remove it (* black plastic parts).
* If it accidentally adheres to the painted surface and is completely cured, polish it .
Application:
Shake Well
Apply a few drops to applicator
Apply in straight line
Allow 4-8 min and thoroughly wipe of residual product.
*Allow a minimum of 12 hours before exposing to moisture, water or the elements.
Capacity: 30 ml
Country of Origin: Japan

This product hasn't received any reviews yet. Be the first to review this product!